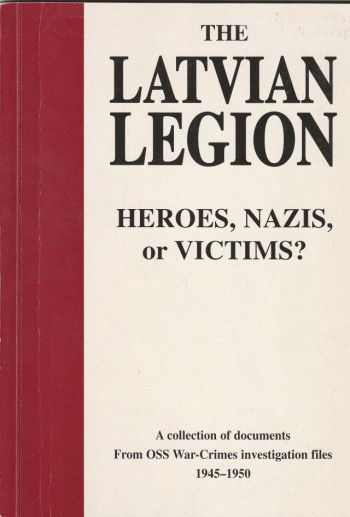 The Latvian Legion Heroes, Nazis or Victims a Collection of Dokuments from OSS War-Crimes Investigation Files 1945 - 1950

100pp. Faint , almost unnoticeable remains of a sig. on front cover, ownershipn sig. on half title. Else A very good, spotless, unmarked copy. " The argument of the pamphlet is that it was the Nazis who, by ordering the organization of the Latvian Legion, committed a war crime under the Hague and Geneva conventions.." ( A. Ezergailis) "The Legion came into existence by violating international laws ---- The tragic fate of the Legion cannot be overcome by using Nazi propaganda: it was wrong when it was used during war-time, following it. it is worse now." (H. Biezais)

The Latvian Legion Heroes, Nazis or Victims a Collection of Dokuments from OSS War-Crimes Investigation Files 1945 - 1950